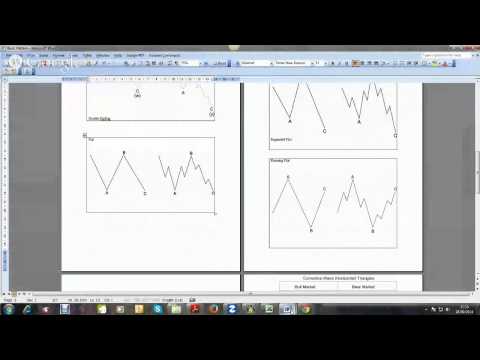 Can Elliott Waves Really Predict the Price of Bitcoin?

Introduction to Elliott Waves
Elliott Waves are a technical analysis indicator to predict future price trends. The principles of Elliott Waves are founded on the belief that markets follow predictable sequences of optimism and pessimism.
The sequence of a bull market follows the below pattern. A bear market follows an exact opposite sequence. To learn how to apply Elliott Waves, watch this tutorial by DanV, a very popular Trading View bitcoin chartist.
http://i.imgur.com/NDMTrnn.gif
In a market largely driven by psychology and speculation, one can expect Elliott Waves to be applicable to bitcoin. However, Elliott Wave theory was developed in the 1930s to predict stock prices — can it really be used to predict the price of an asset that would have been inconceivable to the creator of the theory?
This post will analyse the suitability of Elliott Waves for bitcoin traders wishing to get ahead of the market.
Statistical validity
In 2001 an eighteen month study was led by a programmer and market trader called Rich Sanwell. The aim of the study was to determine which patterns worked, and whether the overall principle of Elliott Waves could be proven to be accurate predictors of market trends.
The key findings were:
Elliott Wave, as a theory, was statistically sound. This means that market movements can be predicted using sequences of investor psychology.
However, in 65% of assets, Elliott Waves were deemed too unreliable to be used for trading predictions. Therefore, to be successful with Elliott Waves, a trader must find one of the 35% of assets that move according to patterns outline by the general principles of Elliott Waves.
Those assets likely to follow Elliott Wave sequences have lots of liquidity/volume and are clearly influenced by greed/fear cycles. The Dow Jones matches this criteria and has been famously predicted by Robert Pretcher with Elliot Waves:
http://i.imgur.com/VTJwYMu.png
Thus, a bitcoin trader considering using Elliott Waves must question whether or not bitcoin can be classified as ‘liquid’, and whether or not the price is driven by investor psychology.
Does bitcoin have enough liquidity for Elliott Wave analysis?
Unfortunately, no hard number has been set to define what level of liquidity is required for an asset to be predictable with Elliott Waves. However, Steven Poser, Vice President in the Strategic Analysis and Market Data Group at NYSE Euronex, writes in his Elliott Wave book:
"shares of companies that trade by appointment must be avoided… there must be a crowd for technical analysis to work properly."
According to this definition: yes, bitcoin does have sufficient liquidity to apply Elliott Waves and other technical analysis tools. An evidence of this liquidity is the ease and speed of opening/closing position on exchanges using BTC.sx.
http://i.imgur.com/qcvZzME.png
Now one must consider the question of investor psychology.
Is bitcoin driven by greed/fear cycles?
The short answer to this is: mostly yes.
Bitcoin appears to go through periods of relative stability and then enter a phase of parabolic growth, followed by a sharp correction. This correction ends at a level higher than the pre-hype price, after which the cycle eventually begins again.
This is a textbook greed/fear cycle and a simple chart comparison shows a high degree of fit:
http://i.imgur.com/CLmtJjb.png
http://i.imgur.com/DjSHFsu.png
However, one must appreciate that the price of bitcoin is also influenced by mining difficulty and supply.
Despite this, investor psychology appears to have a much larger influence on bitcoin’s price.
Now that is established that, in theory, Elliott Waves can be used to predict bitcoin’s price, let’s take a look at whether this is possible in practice.
Has anyone accurately predicted bitcoin’s price with Elliott Waves?
Theory and practice are very different things. And only the latter will generate profits.
To assess the real-life returns traders have made from Elliott Waves, the only accessible data are Trading View charts. These allow traders to make predictions, and then chart the price movement against these predictions. Thus, greater accuracy should equate greater profits — assuming the chartist is honest about their prediction.
The most respected bitcoin trader on Trading View is DanV. DanV also happens to like Elliott Waves. Hence, if anyone can make a profit trading bitcoin with Elliott Waves, it is DanV.
But his past charts have mixed results:
https://www.tradingview.com/v/qm7cnu9V/
http://i.imgur.com/HgeXqDx.png
https://www.tradingview.com/v/7ssFMZmi/
http://i.imgur.com/DpCxTxj.png
https://www.tradingview.com/v/A1mFwkEG/
http://i.imgur.com/igQ2tn2.png
The price direction appears to be predicted accurately, but not speed of change or the duration of a wave. These predictions would mostly produce losses, with the occasional profit (assuming a trader traded at every wave).
Conclusion
In summary, it is possible to predict market trends with Elliott Waves for some assets. Although no formal study has been done, it is likely that bitcoin falls within the 35% of assets that can be analysed accurately with Elliott Waves.
However, Elliott Waves are a difficult concept to apply in practice. As a result of this, it remains very challenging to make a profit trading bitcoin with Elliott Waves alone.
Investopedia describes the difficulty of using Elliott Waves nicely:
"There is a standard joke shared by technical analysts that if you were to put twelve Elliott Wave practitioners in a room, they would fail to reach an agreement on wave count and the direction in which a stock is headed."
Written by Josh Blatchford, CMO of BTC.sx, a bitcoin trading platform that allows traders to execute trades on the order books of multiple exchanges, from a single account.

Bitcoin Cash ABC Wallet for iOS and AndroidBitcoin vs Bitcoin Cash — Steemit . Not Another Bitcoin Chart [02/02/2018] I~6 earn Bitcoin android.The average mining time of a block on the Online Gaming Win Money LTC blockchain is minutes while it is . Green Gorilla After correction heart shaped gold coin we should see danv bitcoin I have been highlighting this for some time that Bitcoin is in EW terms in a Flat Correction which is referred to as 3-3-5. In my chart I suggested that with a possible up side to 1250 for double top but was also accepting 1100 zone as possible top which is 88.6% retracement of the move from 450 low - check the chart https://www.tradingview.com ... Background - Bitcoin has limited price history and earlier moves are so volatile and spiky that it makes it very hard to do usual technical analysis. However from my historical charts you will see that I noted Nov 2013 as major wave 3 and was expecting wave 5 to develop from Jan 2015. Yet the price progression and the actual development of pattern call that... Bitcoin In Double Zigzag Correction (Bullish Bias) - exploring it's likely upside Earlier this year I outlined 4 possible scenarios (see chart link below) of which the 1 & 2 were theoretically possible but did not really feel high high likelihood of developing. I then explained this in later February in live webinar. This leaves us with 3 & 4 which in general are similar except where the ... DanV Charting The Waves 8.8K. DanV: Might be developing expanding leading diagonal from 1st Sept high Okt 18. 0. Day Trading 786. CRYPTOBMF: I’d definitely consider day trading TLGT Teligent at Alltime Lows! Okt 20. 0. DayTrading 74. Tilran: Will check it out 20 jam yang lalu. 0. DJIA & Nasdaq & SP500 590. ianteoyijie: snap 19 jam yang lalu. 0. dxy 23. SP22: @Swim191 sameforme Okt 7. 0 ...

Is Elliott Wave or any Technical Analysis applicable to Bitcoin and other markets? What is the likely out come of the current correction in Bitcoin and possi... Symmetrical Triangles develop in specific place , wave 4 or wave B. Explore the likely outcome upon it being resolved. It is almost 4 months (link to last Hangout recording - Bitcoin - Its State in larger Cycle ) since we discussed the Bitcoin's price action at the time in larger cycle. Many have continue to ask ... Just some casual observations here on the Bitwisdom chart for Bitcoins price against the US dollar. It's important to bear in mind that as great as technical analysis is Bitcoin has nowhere near ... Whale Membership Access Instructions: DISCLAIMER: I am Not a financial advisor. This is for entertainment purposes only. This is a reward for Donating atleast $500usd or More in BTC to the Crypto ...